To be honest… it’s hard to know where to begin this story, the depth of which I still have not fully processed...although one thing is for sure – as I write this my precious son has a full belly and is asleep on me – I LOVE IT! 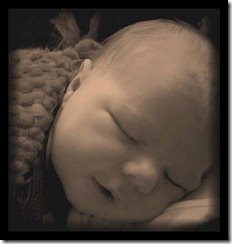 Birth is one of those things that caused me to trust even great in God and His timing!  I had NO idea what to expect, what a contraction felt like, how short/long labor would last, how painful contractions really are… and most of all, when it would all begin!!  {this last part was hard for me… I like to think I control the timing on things in my life…}

A few weeks before was I thought was my due date all along, I found out that it was actually 5 days later!  This was somewhat of a relief and somewhat discouraging because my mom had already bought her flight and we both wanted her to have as much time with Aaron as possible… knowing that the likelihood that he would be late was high.  However, the time that we did get to spend just the two of us was wonderful, refreshing, and relaxing! 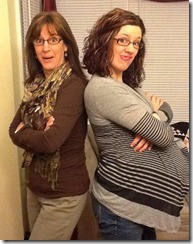 Aaron’s due date – Feb 4th – came and went fairly uneventfully.  My doctor did have me go to a stress test that day, as is routine here, and I found out that I was dilated 2 cm and having contractions every 4-5 min apart… WHO KNEW!  I seriously couldn’t feel them, even when I tried.  But this was encouraging to me, so mom and I did even more walking to try and get things going… it must have helped a little because by my next stress test on Thursday I was 3 cm and contracting every 2-3 min… but still couldn’t feel anything!  This was both encouraging and discouraging. Progress was good.  But if it was that much, why hadn’t I met my son yet?!?! So… we walked even more!

With the threat of snow upon us, my dad bought us a hotel room about a mile away from the hospital…I was hoping this was necessary and knew that I could go from thinking we didn’t need it, to being really glad we were that close at any point.  However, Aaron must not like the cold very much because when we left on Sunday and came back home (about 30-40 min from the hospital we had chosen) it still didn’t seem like he was going to grace us with his presence any time soon! 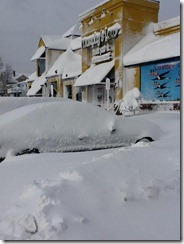 When we got home, the big chore of trying to shovel out our driveway was in front of us! 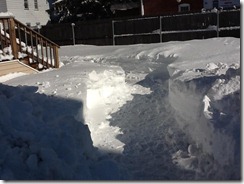 I wanted to help so bad, maybe it would start things up, but both my mom and Mike were very insistent that I go inside and help by making Hot Chocolate and lunch!  I was not allowed to risk injuring my back!  I pushed back for a little while, but eventually conceded...:)

4 PM, Sunday February 10th - When the shoveling was done, I was afraid to hope, but thought I was finally starting to feel those contractions I had supposedly been having. So, I laid down to rest (if it was real I knew I would need to rest), and start timing.  I did not alert my mom or Mike right away and tried to seem “normal”… still afraid to hope… but felt things getting stronger and about 2-3 min apart.  Eventually unable to hide it, my mom caught a look of pain on my face.

6 PM - So, the rushing around the house to gather everything, wait for the pizza we had already ordered to be delivered to take to the hospital with us [it seemed to take forever!], and finally we were off.  Texts were sent on the drive, my sister called, but I couldn’t talk for very long, and the roads – bumpy from ALL the snow – were not pleasant!

6:30 ish – We arrived at the hospital, checked in, and found out I was 6 cm!  At this point I’m thinking, man this hurts, but I already half way.   This labor is going to be as easy as the pregnancy, praise God!   My doctor arrived shortly later and said I was about 8 cm – YES!  We did some walking around, and my water broke! [or so I thought… it ended up just being a
“high leak” – which I had never heard of, but I guess it’s possible for your water to spring a leak instead of break fully.

So, we walked a little more.  I then sat on the bed for a little bit with dim lights and piano music… just breathing and praying.  This was one of the most “surreal” parts of it all. It was so peaceful.

9:30 PM – The nurses encouraged me to get out of the bed and stand leaning against the bed to move things along. [This was part of why we chose this hospital… the nurses were very much like midwives… yet we’re still in a hospital should anything go wrong]  With this slight change in position the urge to start pushing began… my doctor checked me again and I was already 10 cm.  So, she broke my water the rest of the way and we started pushing!  Mike and my mom had both encouraged me that because the first stage progressed so fast that pushing would probably be easy too!

God had different plans!  The timing of the rest is a little blurry to me…

11:30 PM – Still pushing, the nurses were encouraging me to try different positions besides being on my back at about 80 degrees, but my back labor was so bad I was very stubborn and resisted. We did try a couple different positions, but nothing seemed to help move things along… and I was starting to get tired and pretty discouraged.  There were times when I would push and my doctor would be over reading the chart, which was very mentally discouraging, because obviously Aaron wasn’t getting close enough to coming that she needed to be there to catch him.

12:00 AM, February 11th – We all had to have a couple different conversations about the options before us.  It didn’t appear as if Aaron was going to be able to make the turn through my pelvis on his own… and because I had been pushing for 3 hours at this point I was getting more and more swollen which was decreasing the likelihood of him coming through.  My doctor thought part of the issue was that I was only having “big” contractions every 3rd contraction, that made me feel need to push… the rest I was breathing through. Her advice was a SMALL dose of Pitocin to try and make every contraction a “big one”.  This started to kick-in, and I was feeling the need to and pushing at every contraction but Aaron still wasn’t coming.

12:30 PM – I was faced with another decision, because although Aaron’s heartbeat and everything were fine… he needed to come out.  My body could not handle much more. A c-section was starting to be mentioned and part of me wanted to just opt for that.  Thank-God for Mike and my mom and their strength or I might have caved!  The other option was to try it with vacuum assistance… so that’s what we did!  The first time it didn’t work and my doctor had said they could only try 3 times, so the reality of a c-section was hitting me hard, but I was determined, after Mike and I prayed together, to not go there.

1:00 PM – 1:17 AM – This part is a blur, I just know I  pushed a couple more time without the vacuum and then one more time with it… and everyone was yelling at me to keep going. I felt the biggest burning sensation of my life that was telling me to do everything except push, but kept going… and before I knew it my baby was out and in my arms!  He was perfect and nursed almost right away… with a little coaching for mama from the nurse. 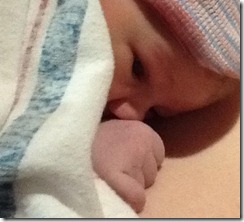 The trama on my body, due to all the pushing, is pretty extensive. It took awhile for the doctor to finish doing what she needed to and for us to get ready to go to our room.

3:30 AM – We were ready to head to our room!  Mike wheeled Aaron there in his pram… while the nurse and my mom tried to help me up. My heart started racing and my hearing started going, so they sat me back on the bed… where I apparently passed-out on my mom [thankful again for her support, even when she doesn’t expect it…].  They decided wheeling me to my room was the best option.  We got there and settled in.  I didn’t get any sleep that night… going over the events in my head, nursing my son, and just starring at him were enough for me!

There is SO much I give praise to God for in this birth story!  I praise Him ultimately for His providence in this whole pregnancy... but specifically for the amazing support of my husband and mom! For His strength to labor and deliver naturally [without any pain meds… one of the biggest reasons Aaron was alert and able to nurse right away!].  For the wisdom to choose a hospital over a home birth…it ended up being a good thing for us {although I totally agree with home births!}   And now for my SUPER handsome son 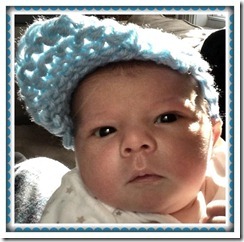 …who has been such an easy baby so far!  (I’ve typed this whole thing in one setting… although I think he’s about to wake up!)

Wow – such a long story and I don’t feel like I gave a ton of details! Congrats and thanks for reading my processing, if you made it through the whole thing!